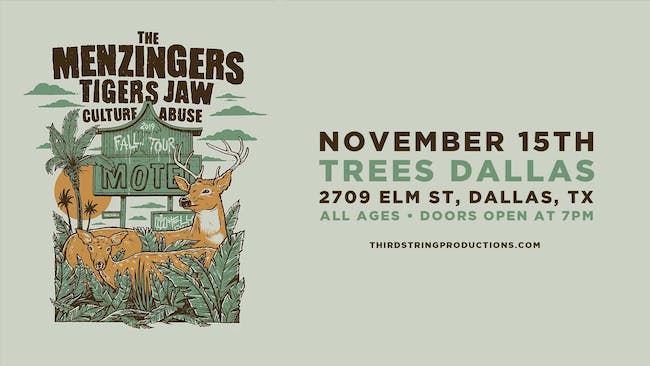 For their fifth full-length After the Party, The Menzingers set out to make the quintessential jukebox record: an unstoppably melodic album primed for bar-room sing-alongs. Delivering anthemic harmonies, furious power chords, and larger-than-life melodies, the Philadelphia-based garage-punk four-piece amply fulfills that mission while achieving something much more deeply nuanced. With its delicately crafted storytelling and everyman romanticism, After the Party ultimately proves to be a wistful but life-affirming reflection on getting older but not quite growing up. "

We spent our 20s living in a rowdy kind of way, and now we' re at a point where it seems like everyone in our lives is moving in different directions," says Tom May, who joined fellow singer/guitarist Greg Barnett, bassist Eric Keen, and drummer Joe Godino in forming The Menzingers as teenagers in their hometown of Scranton. Adds Barnett: "We're turning 30 now, and there's this idea that that's when real life comes on. In a way this album is us saying, 'We don't have to grow up or get boring—we can keep on having a good time doing what we love.'"

The Menzingers explore the tension between recklessness and responsibility all throughout After the Party, with the chorus to its opening track " 20's (Tellin' Lies)" brashly asking "Where are we gonna go now that our twenties are over?" On lead single "Lookers"—as in, "You were such a looker in the old days"—the band pays loving tribute to their time spent in Asbury Park, weaving in memories of smoke-filled diners and Jersey-girl heartbreakers. Equally soaked in nostalgia, the bittersweet yet blistering "Midwestern States" offers what Barnett calls "an ode to being in our early 20s and touring across the country for the first time, and just how eye-opening that all was for us." On "Bad Catholics," meanwhile, The Menzingers match their heavy riffs and high-powered rhythms with a gorgeously detailed narrative of running into a lost love at a hometown church picnic.

Produced by Will Yip (Title Fight, Balance & Composure, Pianos Become the Teeth) and recorded in Yip's Conshohocken, Pennsylvania-based Studio 4, After the Party finds the band breaking into new sonic terrain, such as in the stripped-down reverie of " Black Mass" and the drinking-song-inspired waltz of "Bars." At the same time, The Menzingers bring that sharpened songcraft to the lyrical element of each track, with songs like "Thick as Thieves" candidly recounting their shared misadventures (" Building castles with cans and bottles/Drinking like they do in novels"). And on " After the Party," the band spins poetry out of moments as mundane as listening to Minor Threat on a laptop, turning the track into a dreamy meditation on the innocence inherent in unabashed love of music ("Everybody wants to get famous/But you just want to dance in a basement").

With each song unfolding as its own fully realized story, After the Party came to life thanks largely to an introspective yet outward-looking lyrical sensibility on the part of Barnett and May. "I take notes on pretty much everything I see and experience—things that my friends say or my family members say, things that I see or read," says Barnett. "And then when I go to write, I go back to those notes and try to think about what they meant, and then build something from there." Working in a similar way, May points out that "a lot of my songs come from things I took down in the notepad on my phone when I was out at night and then came back to months and months later." The Menzingers' most refined album to date, After the Party was also shaped from an intensive writing and pre-production process that involved holing up for five weeks in Yip's studio. Along with sculpting more expansive arrangements, the band focused on experimenting with new effects and production techniques to forge the album's dynamic but intricately textured sound.

After the Party' s sophisticated yet emotionally raw songwriting also owes much to The Menzingers' broadening their palette of influences in recent years. May, for instance, mined inspiration from the off-kilter song structure of Regina Spektor. " Listening to her made me realize that you can go in with an idea and build the song around that, without it really having to go anywhere in particular," he notes. Barnett, on the other hand, found himself swayed by their bus driver's constant spinning of Meat Loaf' s Bat Out of Hell on a summer 2015 tour of Europe. "You can say what you want about Meat Loaf, but his ability to craft catchy melodies is absolutely insane, where there' s ten of the strongest melodies ever written all just in one song," says Barnett.

In the making of After the Party, The Menzingers also returned to longtime influences like The Clash, who were key to carving out their sound in the band's early days. Formed in 2006, The Menzingers made their debut with 2007's A Lesson in the Abuse of Information Technology and relocated to Philly in 2008. Over the years, the band steadily built up a devoted fanbase and—in 2012—saw their highly acclaimed Epitaph debut On The Impossible Past voted Album of the Year by Absolute Punk and Punk News. In 2014 they put out their fourth album Rented World, praised as " driving-around-with-the-windows-down music, ready for maximum blasting" by Pop Matters and " one of the best pop punk albums" of the year by Blurt.

For The Menzingers, the emotional depth attained on After the Party took years of determination and perseverance. "When I was younger, I don't think I had the ability to experience how cathartic making music is to me now, even though I've always had so much passion for it," says May. With May adding that "it's really reaffirming and amazing that we've been able to create an existence out of all this," The Menzingers are quick to note that the album was also born from a certain newfound sense of ease and freedom. "In the past our records have tended to come from some kind of struggle, like from being broke or going through hard times,"says Barnett. " This record really came from enjoying life and enjoying the friendships we' ve formed with each other—we had so much fun throughout the whole writing and recording process, and I think you can really feel that in the songs."

A real cool band.Tigers Jaw was formed in 2005 by Ben Walsh and Adam McIlwee. Characterized by unconventionally catchy songs, weaving harmonies, and timelessly relatable lyricism, the band has been organically increasing its fanbase over a decade-plus of touring and releasing music. Walsh & McIlwee recorded Belongs To The Dead in 2006 using a cassette deck and cheap microphones in McIlwee’s garage, drawing heavy influence from The Microphones. Around this time, the duo was also self-recording I’m On Your Side, the “lost tigers jaw lp” which contained early versions of Tigers Jaw songs. Soon after, Tigers Jaw linked up with Run For Cover Records to re-release the Self-Titled album (originally released on CD by Scranton’s Prison Jazz Records), as well as Two Worlds(2010), Charmer(2014), and other EPs. Following a lineup change in 2013, Tigers Jaw began touring full-time. Walsh and longtime member Brianna Collins took some time off in 2016 to write songs for a new album. spin was released in 2017 on producer Will Yip’s Black Cement Records. Tigers Jaw’s first major label release was praised by critics and cemented the band as a songwriting force, satiating longtime fans and gripping new listeners. Aptly described as the middle ground between Fleetwood Mac and Saves the Day, Tigers Jaw have managed to progress and evolve while preserving the spirit of their modest origins in the scrappy DIY Scranton punk scene.Tigers Jaw Forever.

“I was just waiting ‘til I could get out and play music for the rest of the world,” says David Kelling, songwriter and frontman of Culture Abuse. Bay Dream, Epitaph’s first full-length release for the band, offers up ten impeccably-crafted songs full of personal and universal lessons. And the best advice is simple and practical. “Be kind to the bugs, be conscious of others, be careful with drugs, be kind to yourself even though it gets hard,” Kelling sings out clearly over searing, rhythmic guitars provided by John Jr and new addition Nick Bruder on “Bee Kind to the Bugs.” Together with Shane Plitt on bass and drummer Ross Travers the band provides the same strong rock foundations and memorable, critical lyrics as their debut, Peach, but Bay Dream travels exciting new territory for the five-piece. New territory makes sense, as Kelling has relocated to Los Angeles from San Francisco, and the songs read like open letters to both the cities and the people in them. “I grew up in a super small town called Murphys, California... Once I graduated high school I left. At first I set out for San Francisco, then as everything keeps moving it’s brought me down to LA. So for now I feel like I can’t go back home until I feel fulfilled with chasing this dream.” So there’s no wonder physical and emotional movement play off of each other effortlessly throughout Bay Dream. The title and opening track deals exactly with the guilt of moving away from friends and family to follow a dream.“Dip”is about struggling to keep those loved ones relevant: “Time keeps dragging like a big slug, I get squished like a big bug, trying hard not to lose control, tell me what you wanna say, tell me cuz I wanna know, tell me cuz I gotta go.” The deceptively simple words reveal a happier albeit wiserside of Kelling’s songwriting. “I wrote songs in my head until I got a guitar. Just going after the sound that I think each song needs individually, so the sound is in constant change,” Kelling explains. He cites listening to everything from Billy Boyo, to Paul Simon,to Sly and the Family Stone during the making of the record. Despite the variety of influences there is still plenty of cohesion throughout the songs,thanks in part to Grammy-winning engineer and producer Carlos de la Garza, whose past experience working with artists like Ziggy Marley, Jimmy Eat World, M83, and Paramore was a glove-likefit for the breadth and nuance of Bay Dream. Despite the more upbeat sound and outlook, there is no escaping the uglier side of life. Everywhere lurk threats, obligations, limitations, and the will to fight through them. “Rats in the Walls” is full of the anxious excitement that only the love/hate relationship that is city-life in America could inspire.Lyrics like, “But the bugs in your bed, the rats in the walls,and the bill collecting phone-calls, make it harder and harder, and the rent’s going up... Don’t waste your time”are more about the beautiful fleeting nature of life than any specific apartment. Where Peach dealt with being in the middle of painful times, Bay Dream is about getting through them to find the sweet times are even sweeter. “I miss the way the air smells, I miss seeing the Bay Bridge across the water, the feeling that there is still more out there,”David says of his old city. “It’s a battle because that’s where my family is, and as time goes on everyone’s getting older and I don’t know how much time I have left with them. But I still have work to do out here in the world.”Each song is proof that work is paying off.It’s tempting to see Bay Dream, due out June 15th, as a concept album. “Bluebird on My Shoulder” is the perfect ending song that brings everything into perspective like a drive down the California coastline, and the dub influence is just right. Kelling remarks, “I've written songs like this always. Just finally