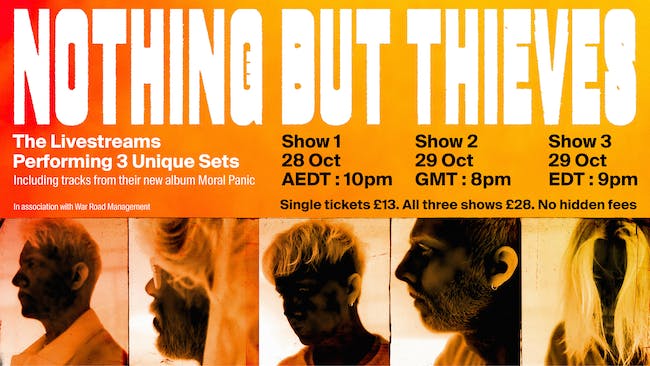 Nothing But Thieves: Live From The Warehouse Livestream Concert

iCal
Google
Nothing But Thieves presents "Live From The Warehouse" livestream concert event!

NOTHING BUT THIEVES presents a special livestream concert event:

LIVE FROM THE WAREHOUSE

Including songs from the new album MORAL PANIC

Southend five-piece Nothing But Thieves have announced an exciting livestream series of shows Live from The Warehouse, which will take place across two dates and three time zones later this month and will see them perform songs from their forthcoming new album Moral Panic live for the first time. The announcement follows the release of recent single and video Impossible and news of their huge UK, Ireland and European tour for Autumn 2021.

Broadcast Live from The Warehouse, via multiple angles in the round, it will be a completely new way to experience Nothing But Thieves, who have a well-earned reputation for their energetic, impassioned and infinite live shows. The band will perform three completely unique sets on 28th and 29th October across three time zones, which will feature brand new tracks from new album Moral Panic, rare songs, old favourites across their previous two albums Nothing But Thieves and Broken Machine, covers and re-imagined tracks.

The band add; “We are living in an unprecedented age of touring. Though we'd love to go on the road now, it's not yet possible, so we have spent the last few months planning these live streamed shows.”

“Our blueprint was that these streams can't just be toned down, knockoff versions of a gig. We want to make this a new way to experience the band. We'll be playing in the round, with new production and multi camera angles at a place we've dubbed The Warehouse. It's certainly been nice to dust off some old songs. Looking forward to seeing this thing come to life in a couple of weeks.”